Your browsers is abit old. For better online securtiy and a better experince your best keeping it up to date. Click here for the latest versions. Once your've updated reopen the site to enjoy.

You can request a catalogue to be sent to you by post, to be emailed to you for later use, or to be made available for immediate download.

Last month, Germinal UK and Ireland Managing Director Paul Billings had the pleasure of appearing on the Net Zero from Productive Grassland panel as part of Countryside COP2.

Modelled on COP27 and its themes, Countryside COP2 is organised by CFE (Championing the Farmed Environment) and returned for a second year in 2022. COP2’s ultimate goal is to bring the UK’s rural community together to show how Net Zero can be realised.

Running from 10 to 14 October, there were 14 events, taking the form of online webinars as well as tenant farmer evenings and stakeholder forums that were hosted in person. An additional event was hosted for land managers on 19 October.

Alongside Germinal, there were several respected organisations and institutions, including Aberystwyth University, the Met Office, Defra and Yorkshire Water.

On 13 October, Paul was joined on the panel by speakers Dr David Lloyd, Dr Christina Marley and Professor Jon Moorby – all of Aberystwyth University.

The four panellists were tasked with discussing: ‘How can we reduce emissions from ruminants grazing grasslands and maintain dairy and red meat production?’

Over the course of an hour, the panellists explored how dairy and red production can be maintained but with ruminant emissions reduced while grazing grassland.

Once the panel was concluded, three key recommendations were provided to encourage implementation in the UK agriculture industry

Across the entirety of COP, there were three prevailing themes among the recommendations:

Following COP2, CFE has produced a word cloud based on which issues are currently on the minds of people working in the UK agriculture industry. 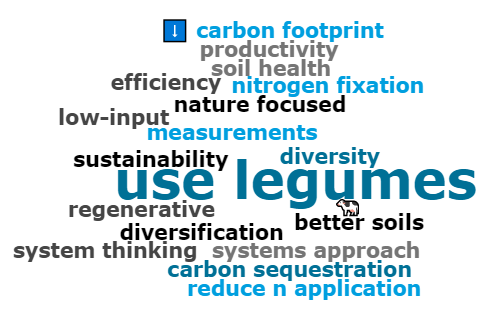 “A word map is a great way of taking everyone’s opinions into account, but also showing where the strongest views are held,” explained Paul Billings.

“The word map produced from our session has a wide range of views, but also a common thread – replacing synthetic nitrogen fertiliser with clover or legumes which provide nitrogen for their own growth and the growth of companion plants. They are a low-input natural sustainable solution for continued food production.”

Get details on any events we are attending, upcoming open days and organisations we work with by browsing our articles.

Germinal was named by European Seed among The 20 Most Climate Friendly Companies Over 2021.
Germinal has helped to establish the Net Zero from Productive Grasslands Partnership.
Germinal and IBERS are working to promote sustainable UK food production.
Developments will also see further investment in digital and ecommerce...
View all